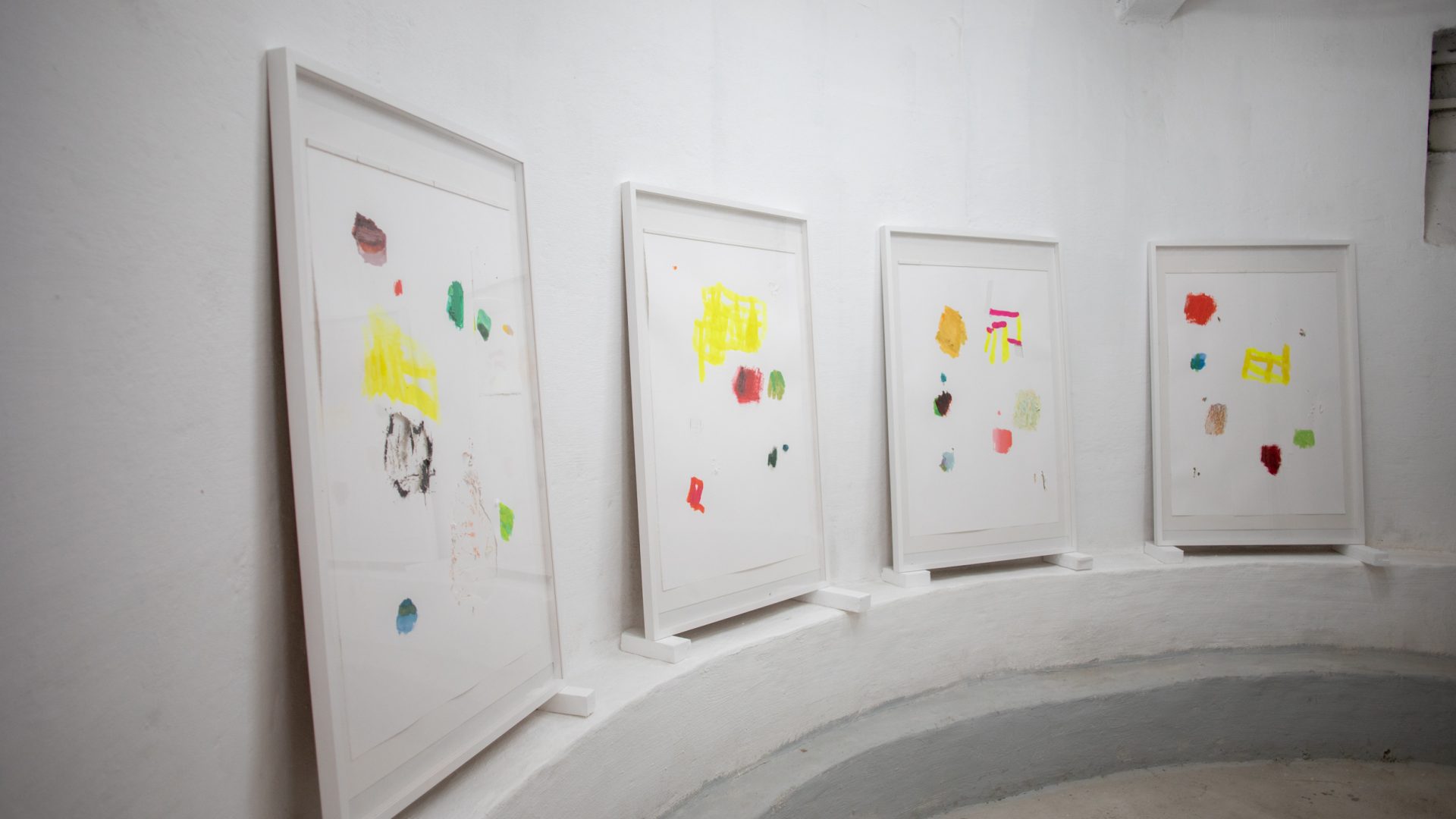 The ERRORS. project, part of the Color Interactions series by Georgi Georgiev – Jorrras, develops the artists program for the deconstruction of the image in a new direction, shifting the focus of exploration away from the expressive potential of texture towards that of colour. The smear became the main form of expression and the artist works with it using oil and oil pastel, colour pencils and pens, tempera and watercolour as well as collage indiscriminately.

Directing his attention towards the expressiveness of colour is a further step in Jorrras’ approach of structural rejection of the iconic or iconographic interpretation of images, conceived of in any conventional – artistic or everyday – form of visual culture. Following this logic, his new visual experiment is again motivated by philosophical premises, driven by the effort to explore the very conditions of possibility of both – the image and the visual.

In this context each smear acts as a manifestation of colour, standing out against the white background as a shape, a trace which captured the energy of creative impulse. Culturally coded forms of expression become hesitant, standing out against the white surface which doubles the colour smears as visual deviations – ‘mistakes’ in the system of norms of conventional visual language which Jorrras refuses to correct, control or conceal… He meticulously studies, encourages, collects, deconstructs and transforms them by removing, drilling, cutting, gluing, adding, recomposing paper and the canvas into marks recreated through collage, scarring the void of the two-dimensional white surface, which both exhausts any kind of perspective and opens up to the gaze otherwise unimaginable 3rd, 4th and nth dimension of the visual image.

This leads to the works in the exhibition devaluing concepts like horizon and perspective, offering the gaze a series of productive oppositions instead: between perspective and dimension, between the creative consciousness and the creative imagination, between creating an artistic world and opening up/constructing new physical dimensions. This approach practically sublates both horizon and the consciousness that projected it, deleting not only linear but also any other kind of perspective, replaced by a multitude of new dimensions, created through impulsive energy ruptures, cuts and tears Jorrras makes in the white paper, the canvas and the mount frame with an unexpected array of instruments – various blades and even drillers and jigsaws which Jorrras uses both as a means to draw with, and as an instrument to carve out or rip open new dimensions in space.

The artworks’ quick, intuitive style is provoked namely by the intolerance for the possibility to correct mistakes, characteristic of the expressive potential of paper. The refusal to correct mistakes is elevated to a leading principle. Instead they are abruptly given a soul, transformed into a different life form. This way, against the paper background, smears act as aesthetic deviations free of necessity – excesses of meaning, rhetorical breakthroughs in the act of painting where smears are not merely an authentic artistic style and guarantor of the artistic technique, depicting symbolic (natural, cultural or social) worlds outside the author.

Jorras’ approach goes even further, interpreting smears as an index, a trace, a remnant of painting and a physical mark of the symbolic worlds of living creative imagination. The gesture of each of the colour marks is a unique psychosomatic index of a momentary sensual-ideal vibration, captured in the eventfulness of the creative process, framed in the relationship between the white paper, colour, the artist’s emotional-reflexive body and the short-term memory of the creative instrument at hand.

In this visual permutation each colour smear bears testimony to an aesthetic regime of pure singularity, generalising the artworks in the exhibition, which act as a colour haiku for which paper is not just a two-dimensional surface but empty space itself.

Nothing, in the context of which the various colour gestures (poetic, ironic, dramatic, romantic, quizzical) in the communication between the artist and the world are brought to light and allowed to freely interact with their kind. Driven by Jorrras’ characteristic eagerness to create his own visual language, super-abstractions, in the bottom of this exploration of the possibilities of ‘nothing’, are implemented in the dynamics of the relationship between the uniqueness of the colour “deviations”, the void of the white surface and the primary and secondary voids/spaces discovered in it through dissection.

Their relations are the foundation of the grammar of the image. The provocation to the observer is intrinsic to the rules of this game – to rethink the established pre-comprehentions about the essence and value of the image, their existing and possible relations and last but not least – their regimes of communicating with the viewer’s gaze.