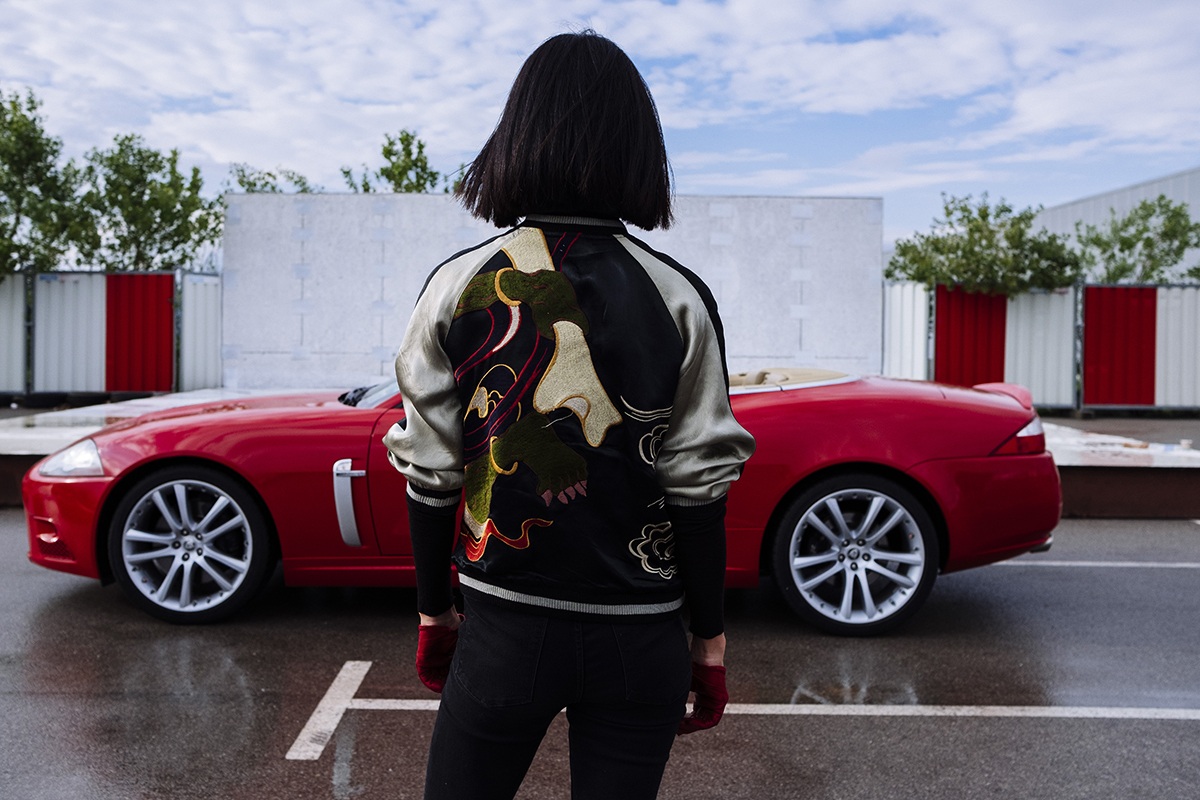 Iskra Blagoeva and Mihail Novakov do not work together for the first time, but this is their first joint exhibition. As the title suggests, they develop new versions of previous projects, transforming them into completely new works. At the same time, their works are connected in a new way – by mixing images and ideas, and exchanging roles and positions. However, without the familiar battles of the sexes or for confirmation of authorship.

“Beast”* is a performance by Iskra Blagoeva from 2017, showed for the first time within the exhibition Sex Appeal, One Night Stand Gallery, curators: Ivana Nencheva, Daniela Radeva and Stefka Tsaneva. As part of the performance, the artist makes tours in the neighbourhood around the gallery with the exceptionally attractive and remarkable Jaguar XKR Convertible. The rule is that anyone can get into the car, i.e. be admitted inside the work of art, but on the condition that they post the statement ‘Women are better artists on Facebook. This is how Iskra Blagoeva challenges the validity of the sexist idea of the woman, who is attracted by the expensive car as an accessory and attribute of virility. However, she also symbolically reverses the direction of the professional debate on the power between sexes. Contrary to the militant feminism, Iskra Blagoeva goes into the image of the modern woman who needs no validation of skills, independence and womanhood. If somebody is behind this realization, contemporary art does not need to wait for society to allow the update of old problems. During the opening on April 20, in Plus 359, there will be a new performance, again with the opportunity for the audience to travel in a luxurious atmosphere, but this time with Blagoeva’s new statements and new rules of the game.

Cars, Chicks and Landscapes is an exhibition by Mihail Novakov from 2012, displayed in Vaska Emanouilova Gallery, curators: Boris Misirkov and Georgi Bogdanov. On the invitation of Vladia Mihaylova to the most established authorities in the area of photography to present the most interesting of this art in Bulgaria, they chose only Novakov and thus uncompromisingly identified him as ‘the only one’. The exhibition is a selection of hundreds of his photos and demonstrates his method to try not to artificially create stories, scripts or implied meaning. The title highlights this by listing the most predictable storylines, which are at the same time the most difficult. One must rely on an unerring eye and a superhuman visual instinct to catch fractions of a second that are never forgotten. Novakov’s ability to tell a story by capturing the moment, has not only been approbated by the relevant institutions and authorities, but also is confirmed in his overall portfolio.

Mihail Novakov is also chosen for the exhibition Cars, Beasts and Landscapes. Iskra Blagoeva invited him as the only one who can capture and document her performance for the second time. She invented the title of the exhibition, mixing the two projects. She selected the frames for her self-portrait, which he had made for her. She examined all of his artistic works and selected the photos that fit to her image from the performance. She posed, but not as his muse, but a muse to herself. Novakov photographed. He did not challenge any conceptual solution, but virtually every image on a durable medium in this project is his creation and bears his authorship.

The exhibition in the specific space of Plus 359 is based on five pairs of perfectly matching large-format photographs of the two artists. At first glance, the theme revolves around cars, travel, luxury, beauty and unfamiliar places. There are confrontations between the images of an over-expensive car and crushed asphalt, or between a portrait of a modern woman and a retro landscape. Questions pop up like “Is this Sofia?” and “Is she from Sofia?” In addition, the question of whether the work had followed some practical script or everything was intuition. What is important, however, is the positioning of the pair of artists in a situation to share a common space, although the word ‘Beasts’ does not imply a peaceful co-operation, but rather a collision

*‘Beast’ in Bulgarian jargon can be used in a figurative sense as a definition of aggression, sex appeal, or both. It is often used as an adjective to the female temper. Also to cars or high-tech devices like electronic or photographic cameras.