with the support of André Serre-Milan 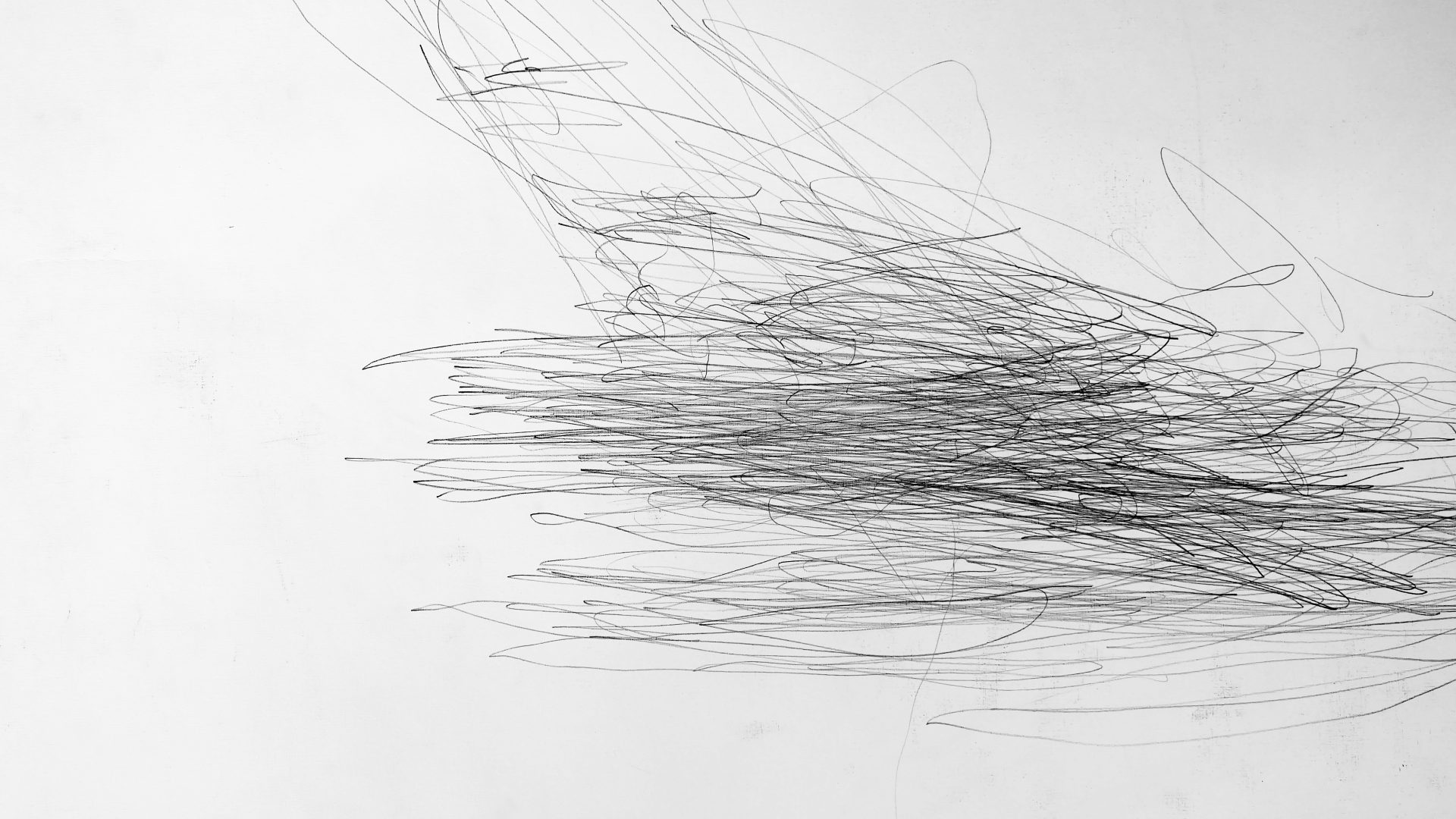 The most laconic description of the drawing as a process is to leave a trace with a tool selected by the artist on a material specified for the artistic intervention. The drawing is the shortest and quickest way to visualize ideas, and in this sense the spontaneous reaction leading to the appearance of lines on the drawing surface as well as the unintentional gesture are sealed directly into the final result. The American anthropologist, Ellen Dissanayake phrases art making as “the ability to shape and thereby exert some measure of control over the untidy material of everyday life”. For Boryana Petkova, drawing is an act of rationalization of the world and not an artistic practice with a certain media. She documents the process of drawing from different points of view – the physical movement of the hand, the interaction with architecture and its surfaces, the sounds produced by the graphic and the derivatives of these sounds like music or computer modelled three-dimensional shapes, the specifics of observation in drawing, or briefly, Boryana analyses the line’s ability to follow the movement of thought. In one of his studies, the British anthropologist, Tim Ingold presents the development of the notion of the line through Indian communication systems, through threads in the fabric and kipu, ancient ceramics, the Australian Aboriginal art, geographic maps, musical notation, the writing system and calligraphy, the schemes of relationships employed in scientific research and genealogy, etc.  In conclusion, one of his findings is that “the fragmented postmodern line does not move progressively from one destination to another, but from one point of rupture to another. These points are not locations but dislocations, segments out of joint.” The hand that holds the pencil in Boryana’s works does not just lay lines on the white surface, it explores territories, creates paths, makes sense of surfaces, leaves traces of work in confined spaces, traces describing emotional states, traces of immediate reactions to the physical environment, of the effort to overcome borders.

In the new project, created for the space of Gallery +359, Boryana has focused her work on the peculiarities of the architecture of the building of the water tower, where in the centre stands a column, which is the backbone of the facility. The movement in the building takes place on a spiral stairway that runs around this backbone reaching its highest point where the water tank is located. In order to walk through the entire space from the top of the tower, it is necessary to go down another stairway to reach the last room – that of the tank. Boryana Petkova’s drawings follow this rhythm defined by the architectural environment; they visually synthesize how the semantics of the idea of human drive to move up unfolds. From the initial effort to keep the body upright to the metaphorical equivalent, describing the personal life course of vertical ascent, where after each point reached follows a descent to the starting point for a new ascent. At first sight, the lines that describe this movement seem chaotic and unrestrained, but in the way they are applied to the walls is sealed the artist’s personal experience. Boryana Petkova presents an endless chart of ups and downs that, besides physical space, covers also a significant segment of physical time. Reflection on the personal story is related to personal memory, which is not a reliable source of objective information. Therefore, by sinking into these linear routes, by means of art Boryana tracks the possibility of restoring missing links between the debris of memories or reflects on the cause of their loss in the context of an increasingly fragmented world. And art, according to Gilles Deleuze “is the most direct intensification of resonance and dissonance between bodies and space, between one medium or rhythm and another.” In this sense, Deleuze sees the philosophy that art can offer “not in the theory of art, in the fabrication of its silent or underdeveloped concepts, but in the part that philosophy and art share – their corrosion in chaos, their ability to ride the waves of one a vibrational universe without direction or purpose – in brief, their ability to expand the universe by allowing its potential to happen in another way, to be outlined by concepts and impacts.”* The visual result of Boryana’s intervention on the walls of the water tower combined with the sound installation created in collaboration with André Serre-Milan focuses both on the natural human desire to control our surrounding living environment by enclosing it within the boundaries of our established perceptions thereof, as well as on how illusory and uncertain these boundaries are, and respectively, our ability to rely on the existence in a comfort zone of established concepts that set the direction of stability and balance in our life course, constituting a personal micro-world that is beyond doubt. The sound installation Vertical Steps enhances this sensation with the uneven sound of steps structured by the method of octophony. It registers Boryana’s movement up and down the stairs of the tower during her work on the exhibition, capturing through the sounds not only the physical effort associated with the movement, but also the various emotional states of the one who moves, and these sounds merge so that it is no longer clear for the listener whether the direction of movement is up or down.