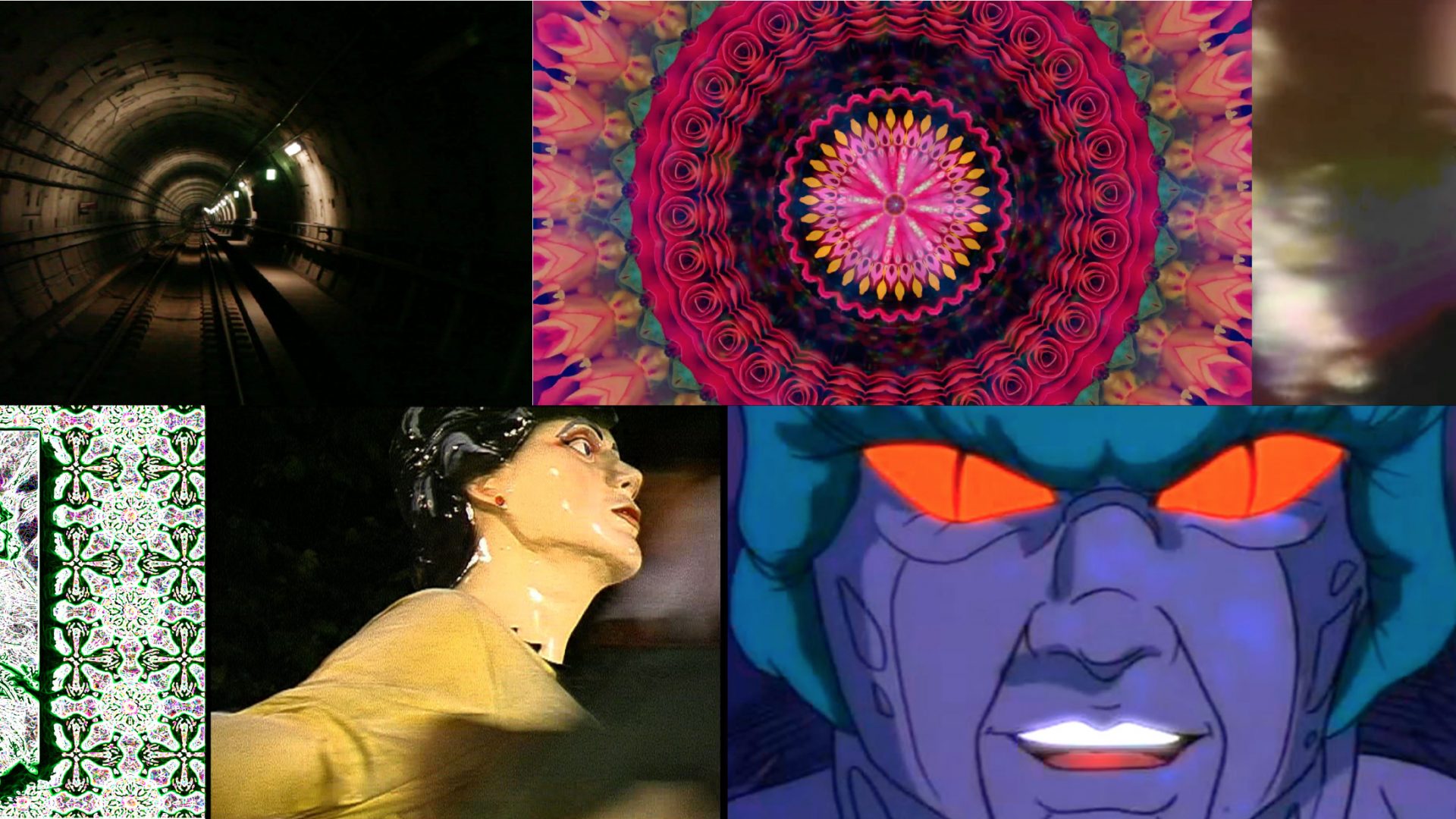 Psychedelic states describe changes in human perceptions that cause synesthetic states. They are the result of activating connections between the different brain areas that are specialized in processing information from different senses. The term “psychedelic” derives from the ancient Greek words psuchē (ψυχή – psyche, “mind”) and dēlōsē (δήλωση – “manifestation”) and translates as “manifestation of the mind”. In everyday life we perceive the signals coming from the senses separately, autonomously – we see colours, we hear sounds, and we feel touching. In the case of synesthetic states, this modality is mixed up and people “see sounds”, “hear colours”, etc. Typically, psychedelic states are associated with taking various stimulants known from ancient ritual practices of cultures that are subject to anthropological and archaeological research. The authors, whose video art is displayed within this project, present the dynamics of the present whose various communication channels attack us daily with images, sounds, colours and shapes, which constantly provoke our sensitivity, creating an ongoing catalyst of unexpected thought connections. The visual perception of this information flow passes through personal experiences and proficiencies to awaken unexpected memories and associations that, mixed with subjective emotional experience, create a hyper-reality, in which consciousness mixes images, colours, as well as the hypnotic impact of everyday objects whose monotonous physical movement creates a sense of existence beyond time and recognizable inhabitable space. The paintings that consciousness constructs in a psychedelic state can only be compared to the images that fill a dream, which, according to Ludwig Binswanger, is nothing but a certain way of Human “Being-in-the-World”. Michel Foucault regarded dreaming “as the return of radical freedom to the human subject – paradoxically reveals the movement of freedom to the world, reveals that primordial point, from when freedom begins to exist.” This selection of works by, Tom Lock, Rada Boukova, Georgi Ruzhev , Elisabeth Molin and Eden Mitsenmacher analyse various aspects of the factors that stimulate human perception toward imagery, provoking the standard logic of perception with a maze of visual plots that put the viewer in a position to rethink the options of their own perception and description of the world.

Tom Lock compiles mystical and symbolic figures whose images are used in historical children’s books, movie images, TV shows, comic graffiti, ads, etc. In his works, Lock analyses the mass media flow, which, combined with the dynamics of modern life, is interpreted in the colourful and psychedelic aesthetics, which often moves between joyful and melancholic moods and states. Lock often collaborates with musicians and sound artists, regularly using these discursive relationships to create a platform for reflecting on and understanding the development of ideas and decision making.

Tangible objects that are removed from the meaning of their everyday use, find place in the works of Rada Boukova. Rada creates new fields of unexpected associative links that challenge the viewer to compose narratives that change the perspective of observation and turn the observer into a researcher of their own living environment and its opportunities to produce new, unexpected discourses.

George Ruzhev captures the senses with a spectacular kaleidoscopic theatre, subordinated to the idea of the existence of modern man in a world of total information oversaturation. The author visually defines the problem with the “situational identity” of modern man, existing in environment of over dynamism, on the boundary between the virtual and real. Ruzhev perceives the identity of characters and political figures from different times by situating them in a psychedelic space, which through the social networks can instantly become part of the network of a global information exchange.

Elisabeth Molin combines images and sounds of everyday life, creating a general picture that seems to have been taken out of the subconscious of a human being, who has sealed the visual details, weekly noise, music, and conversations that have impressed him in a specific period. The newly created reality works on several levels. It comments on the subjective individuality of the mechanisms of perception of the world registering the way the human mind creates a surreal reality that, like a crystal structure, reflects equally perceptions of a different order. The fact that these perceptions are not connected in a coherent narrative refers to unstable thought patterns that describe the world not as an ever-questionable entirety, but as a place where both past, present and future exist, a place that constantly changes at a speed that we cannot even register.

Eden Mitsenmacher uses pop culture as a frame of reference for social and personal critique but also as a way to create familiarity and accessibility. Sharing and connecting experiences between an I and a You. Presenting hyper-worlds, built from cultural stereotypes and clichés, then pushed to the brink of emotional overload. Kitsch is a conscious strategy in her research and practice. As one of the many individuals who are experiencing the confusion and struggles in the current macro environment, she is interested in the doubts, curiosity and cognition for the potential new value orientations and its unpredictable future possibilities.