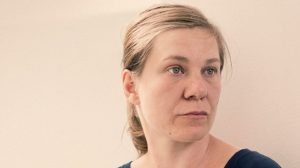 Rada Boukova was born 1973 in Sofia. She lives and works in Paris. Whether it is video, photographs, installations, objects or exhibition projects, she explores the remains of the ideological, economic, and social changes. For her, art is a game of forms and colors, but also a carefully chosen word or word pun, which is rooted in simple but unexpected formal analogies: a blue garbage bag carefully folded lengthwise and framed as a sunset over water; a female body summed up by three triangles roughly cut out from cardboard signifying the woman’s breasts and pubis.