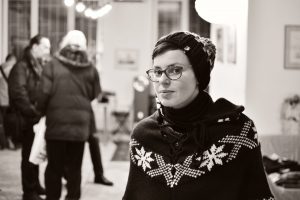 Albena Baeva has two MAs; in Restoration (2008) and in Digital Art (2010) from the National Academy of Art in Sofia where she specializes in art technology practices from 12th to 21st century. In 2011 she was awarded the international Essl Art Award for contemporary art and Vienna Insurance Group Special Invitation.

In her interactive installations for urban spaces, galleries, theatre and dance she uses new technologies and creative programming. She is co-founder of Runabot project, a platform for interdisciplinary performances, studio for interactive design Reaktiv and experimental lab Symbiomatter.