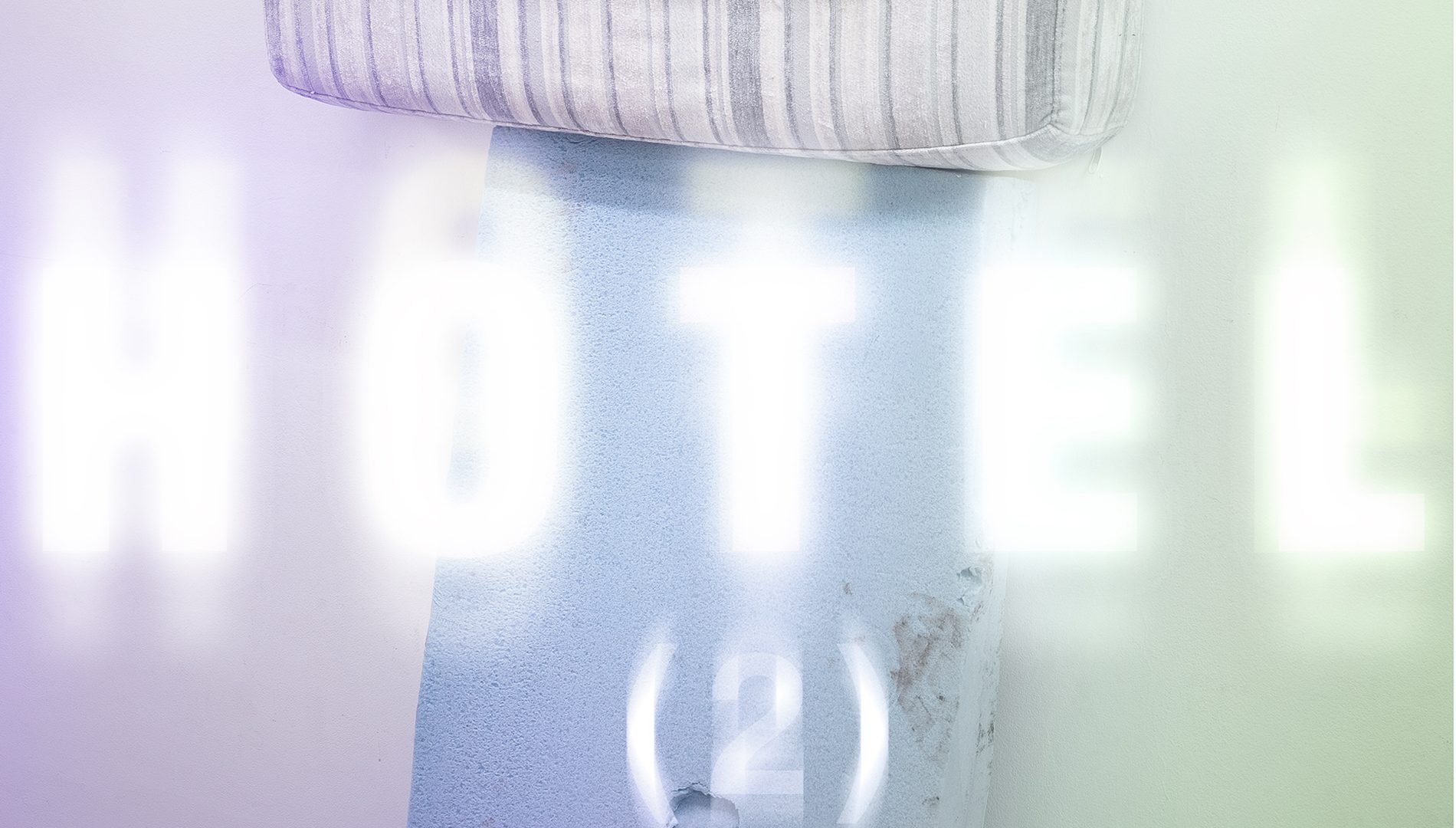 The visual environment created by Georgi Georgiev – Jorrras in HOTEL 2, in addition to painting, includes three-dimensional shapes, which can generally be divided into three categories – building materials, packaging and interior elements of the studio, where he works. Disassembled furniture, chains, various fasteners – each object is carefully manipulated with classic techniques of conservation, restoration or preparation for painting interventions, which in some cases are not carried out at all, but methodologically seal the details of a complete narrative. The invasion of everyday life in the sequel to HOTEL 1 has very clear codes. Construction components describe human creativity, but also envisage mass production. Insulations, formwork nets, cartons and plastic bags with which the product is transported and distributed, sofa, on the one hand a product of industrial design, on the other – convenience related to the philistine life, whose symbolic reading is different from that of the bed used over the years in many iconic art installations. These objects found in or related to the personal history of the author have their characteristic features – colours, lines and shapes, specific surfaces that are made of different materials /a result of the development of applied sciences/ and create tactile, visual, olfactory sensations that engage the senses for understanding them as components of a subjective, artificially created world. The predominant colours of the painting are green and purple. When these two colours are mixed, the colour of mud is obtained – the biblical material for the creation of Adam. Again the paintings show us visible and invisible images, as under the outside of the painting base there are hidden layers telling other stories. This puts the painting of the artist in the position of self-reflection on the mental plan of the creative process itself, which cannot be traced by the simple linear logic of cause and effect relationships. This polysemy and heterogeneity in the choice of components with which Jorrras works in HOTEL 2 is not accidental. It describes human nature not only from the ideal position of its manifestation through art, when the artist is the inventor of the ‘true sources of reality’ *, but also in its primitive instincts leading to the degradation of the living environment as a closed cycle of ever-increasing production of goods and their constant consumption. In our world the images denoting the unique creativity of individuals, are indiscriminately mixed with those of  industrial products whose aggressive ostentation, reinforced by means of marketing and advertising, stimulate the basic human instincts and block the need for introspection in search of our real nature. In this sense, the objects collected by the artist are subjected to autopsy, cut and manipulated so as to reveal their hidden visual features that are only part of the vast scenic picture of a fragmented reality. This micro universe focuses on the symbolic connotation of images and their ability to produce language. Jorrras’s idea that ‘things happen in their truest form when they are at their limit states’ is in fact exposure of the two antagonistic tendencies valid for both the philosophy of art and the philosophy of language – the fluctuation between the poles of objectivity and subjectivity. The human being, for Ernst Cassirer, is a ‘strange formation of existence and non-existence’. According to Cassirer, ‘the representation of an object is quite a different act from the simple dealing with the object. While the former requires nothing more than coordination of motor skills , the representation of space and spatial relations means much more. “In order to represent a defining thing, it is not enough to use it correctly and for practical needs, but to establish a general idea of the object, so that it can be considered from different angles and to understand its relationship with other objects. We need to establish its place and determine its position in a common system. ” Thus the seemingly incompatible details of the visual spatial collage HOTEL 2 from ready-made, painting and manipulated found objects is an internally structured attempt to describe the history of language from the time of its primary manifestation as a collection of inarticulate emotional exclamations to its state of disciplined instrument of thought. Human memory is not just a reproduction of events – it is a complex mental process that is demonstrated in many different ways. Sharing memories through symbols reconstructs not so much the personal history, but rather the experience gained from life. HOTEL 2 again raises the question of the possibility to create a symbolic space built on a subjective awareness of reality, but striving for universal meanings. The combination of objects of different order is an act in search of a synthetic visual code, arising simultaneously based on experience and artistic instinct, on the border between rational and irrational. The ostensible lightness achieved in the play with the parameters of the images, stepping through the two-dimensional into three-dimensional space in violation of the classical traditions of painting, articulates the look inward, to the inner world as a step towards reading the world in which we exist.