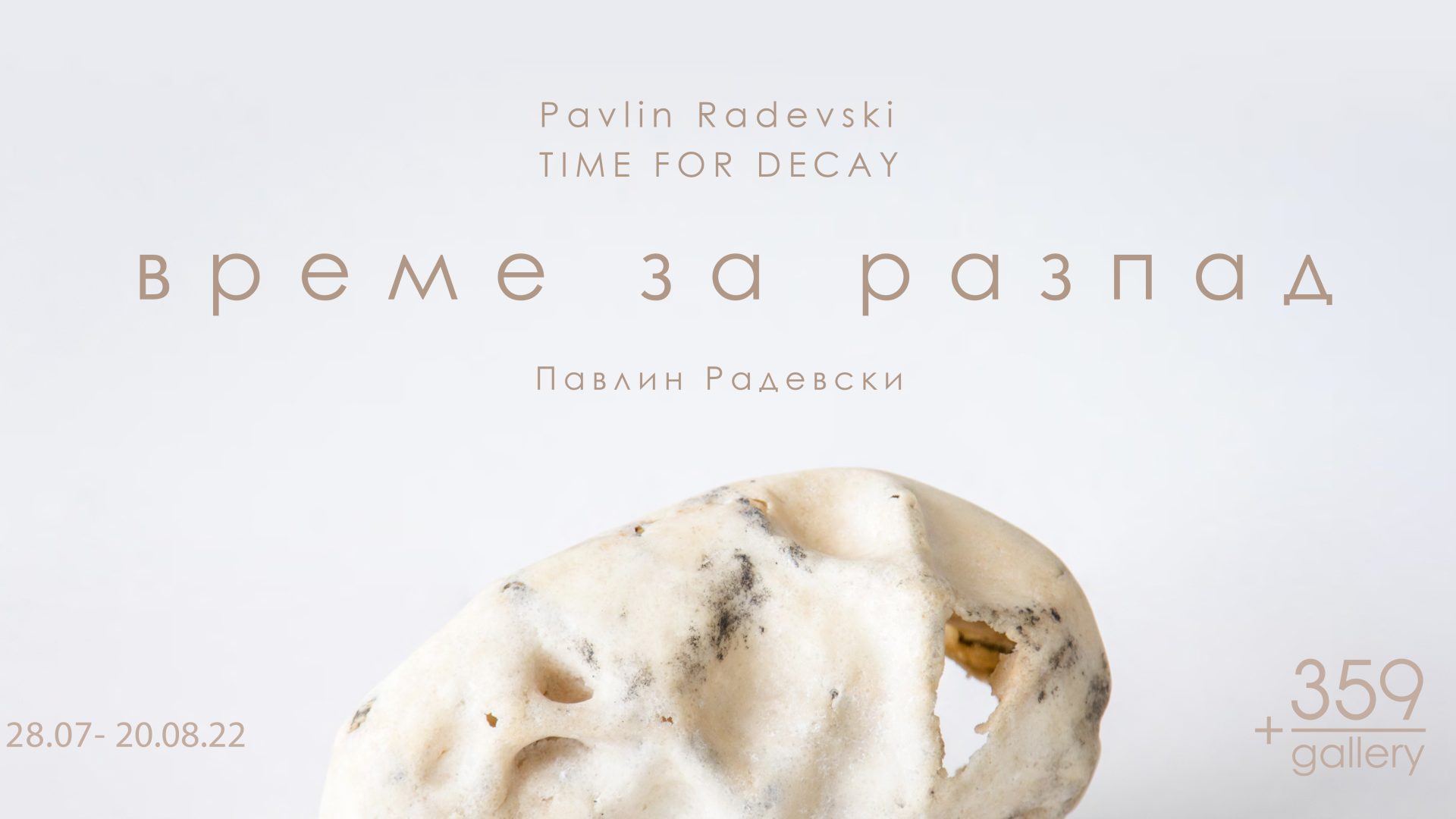 First it was discovered that the last two elephants had disappeared. But the search was soon broken off, for beyond the shadow of a doubt there they were in plain sight: two enormous mushrooms of salt shaped like elephants had swollen the ranks of the saline concretions that had formed in the shallow water. By showering each other with their trunks, they had encrusted each other with thicker and thicker layers of salt, and after pursuing their ablutions well into the night they had grown too heavy to move. There unquestionably they were, paralyzed, asphyxiated, crushed under their burden of salt, but safe from the ravages of time for several centuries, several millennia.[1]

In the exhibition “Time for Decay” Pavlin Radevsky presents a series of salt copies of a prototype undergoing transformation. The original image has disappeared, it belongs elsewhere, to another time, to which the objects transfer us.

The starting point of the exhibition is the contradiction of the idea of preservation and that of loss. The artist, agent of chaos, produces copies, but instead of striving to capture as much information as possible, he causes destruction. At the end of this simulative and deliberate process, the form disappears and the viewer finds himself/herself in a space of white light – informational totality.

The reconstruction of the matrix proves impossible, or at least within the world of matter, perhaps because it is not itself from here, or because the universal impulse towards entropy[2] overcomes, and ultimately defeats, the structures in the information field.

The sculptures are constructed of organic materials, with salt at their base, one of the first means of preservation known to human civilization.

Pavlin Radevsky regards the life of the copy as a function of the original f(o), not as its infinite, entropy-free extension. The imprint becomes the sole goal, and the material for preservation hierarchically surpasses its prototype. Salt, which carries within itself life and death, in the human body serves to transmit nerve impulses, to contract and relax muscles, but in too large a quantity it becomes poison, corrodes tissues, renders water dead.

The exhibition moves in parallel along several oppositional axes (corporeal/noncorporeal, eternal/ephemeral, presence/absence), which are not radically opposed, however, but thought of as a process of transformation, of flowing in and out, from one into the other.

“Time for Decay” follows the line of birth and dying. Initially germinating within the gallery walls, the works emerge, distinct as independent forms, and, like the path of the organic in nature, decay before they can reproduce themselves. Under the dome, the image dissolves – salt on the skin of the tower – returning to its body, back into the ocean of information.

In the process of viewing the exhibition, the audience gathers the deltas in the information field – the differences in the ways the copies have reproduced themselves. In the end, he/she adds the missing visual information into his/hers imagination, completing the image, thus creating a perfect, immaterial copy – ultimately, the endgame.

Pavlin Radevski (1975) graduated sculpture at the Academy of Arts in Sofia in 2001 in the course of Prof. Angel Stanev. He is the author of several solo exhibitions, as well as one of the organizers of the program exhibition “Without Distance”, presenting the work of 21 contemporary young sculptors in the “Raiko Alexiev” gallery in 2015. He is the co-founder of the DEPO SCULPTURE organization, with which he realizes various public events in the area, among which is the exhibition “Sculpture Now” in 2018. Pavlin Radevski is the winner of the First Prize for Sculpture of the Foundation “St. St. Cyril and Methodius” in 2003.

Lives and works in Sofia, Bulgaria..